Classic surf & turf … a first course of steamed oysters in the half shell followed by wood-grilled Brazilian-style steak, accompanied by grilled asparagus and roasted potatoes.

For the oysters (1st course)

Scrub the shells of the oysters meticulously. Then, heat a cast iron skillet over high heat. Add the oysters and pour in the whiskey. Scatter the lavender springs and lemon zest in between the oysters. Add coarse sea salt, to taste. Cover with a lid and steam the oysters until they open. Serve immediately.

For the steaks (main course)

Grind together the garlic, red chile and sea salt in a mortar & pestle. Combine the paste with extra virgin olive oil and slather the mixture all over the sirloin steaks; place in the refrigerator until ready to grill.

Meanwhile, roast the potatoes, as described above.

Serve the sirloin steaks, accompanied by grilled asparagus and roasted potatoes. A hearty malbec from Argentina works beautifully with this meal. Oysters steaming in whiskey with lavender springs and lemon zest 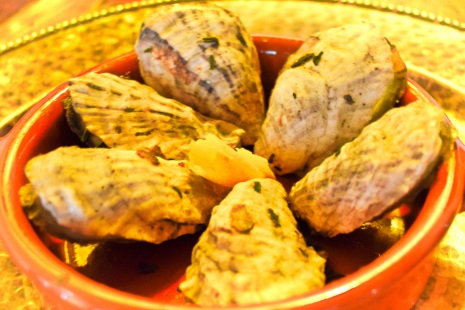 Our first course ~ freshly steamed oysters on the half shell

A tasty cocktail served as a prelude to the oysters ~ Jamaican rum with fresh ginger beer, with a garnish of fresh lime

Fresh garlic, dried spicy red chiles and coarse salt are ground together in a mortar & pestle to form the paste which will accent our Brazilian-style grilled steaks

Giant asparagus spears grilling over wood alongside the sirloin steaks